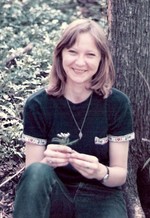 Barbara Gayle Elliott passed away at home on January 17, 2019, with her daughter Jenna and her husband, Bill, at her side.

Born in Newmarket on July 3, 1950, Gayle was a woman of caring and conviction who sought to find her place in the world and a way to make a difference in it. Even as a teenager, her way with words made an impression on her high school English teacher, though neither suspected at the time that he would eventually become her father-in-law.

Following a degree in social work at McMaster University, her drive to find herself took her on a pan-European adventure that included mistaken identities, a brush with the law, and an escape from a vengeful krampus. But at the end of it, she realized that her greatest adventure lay in sharing her life with her dearest love and best friend, Bill Elliott.

An adept gardener, the flowers Gayle nurtured filled her home and its surroundings with colour and life. Her children, Sarah and Jenna, were raised to share in her love of the world. Still adept with words, a deft hand with a crossword and a fearsome opponent across a Scrabble board, Gayle became known to those who loved her as someone to come to for counsel, support, inspiration, ferocious protection, and above all, laughter.

After a valiant fight with cancer, she has moved on to the edge of the unknown, off on her next great adventure. But the seeds she planted in those fortunate enough to have known her will continue to grow, and bloom, and spread the seeds of her warmth and wisdom to take root in a new set of gardens.

Gayle is survived by her husband, Bill; her daughters, Sarah and Jenna; her sisters, Donna and Sandi; and many loving sisters-and-brothers-in-law, nieces, and nephews.

A celebration of her life will be held in the summer. Information about her upcoming memorial can be found at her memorial site: sites.google.com/view/gayleelliottmemorial