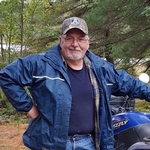 Left bereft by his loss is Ted's best friend and love of his life, his wife, Janet Hogan (nee Leeder). His 4 children Melanie, Matthew, Miranda, Emily and son in law, Timothy Ward have been left with an unfillable void. Ted's 9 grandchildren, Sylvia, Victoria, Sophia, Brooklyn, Samantha, Lucas, Sadie, Lydia and Maxwell have been robbed too soon of their mentor and partner in mischief.

In keeping with Ted's wishes, a celebration of life will be held on Sunday, March 17th, 2018 at Madsen’s Greenhouse, 160 Bayview Pkwy, Newmarket from 2 -5 pm. In lieu of flowers, donations can be made in Ted's memory to the Heart and Stroke Foundation.

"Missed every hour of every day."